The reason for the giant 2015 dust storm in the Middle East was climate change, not the Syrian conflict, and more could follow. 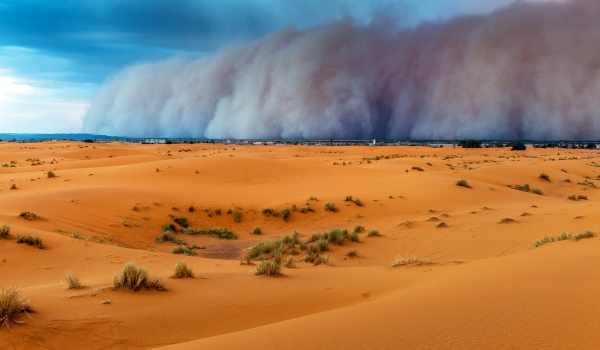 A storm of dust so fierce that it obscured seven Middle Eastern nations from satellite observation has been blamed on climate change.

In August and part of September 2015, a wall of dust driven by a cyclone cloaked parts of Syria, Lebanon, Turkey, Israel, Egypt, Jordan and the Palestinian territories. Flights were cancelled, there were a number of deaths, and thousands of cases of respiratory illness and injuries. Reports initially blamed the episode on the conflict in Syria.

But, according to a new study in Environmental Research Letters, the gusts of dust could be more reasonably attributed to a mix of unusual weather conditions exacerbated by changing climate.

Engineers and scientists from US universities analysed vegetation cover in the region prior to the storm to see if the Syrian civil war had changed the land surface drastically enough to mask the view from space.

In fact the storm-struck region’s plant cover was nearly twice as high that year as the 2007-10 average.

“These observations told us that the normalised difference vegetation index – which is kind of a measure of how ‘green’ the surface is, how much vegetation there is – was not abnormally low,” says Elie Bou-Zeid, an engineer at Princeton University in the US.

“So, there was nothing to suggest that during this particular period there was less greenery or agriculture in the region than normal.”

“If the cause was climate, and this is due to climatic
conditions that are going to become more frequent
in the future, then this is something that will reoccur”

The Syrian conflict itself has been linked to climate change, as farmers have been driven off the land by drought so prolonged it has been defined as the worst in a millennium.

And extremes of heat are predicted for the region that may accelerate the refugee crisis and trigger more conflict.

The US scientists looked at all the weather data, ran a series of meteorological simulations before, during and after the great dust storm, and found that climate itself was probably the culprit.

“The simulations showed that what was very unique about this storm is that, first, it was preceded by a very hot period, and so the land that was not covered with vegetation would be drier and it would be easier to entrain sand grains from it,” Dr Bou-Zeid says.

That summer had been unusually hot and dry, and sustained arid conditions meant that more dust was available to be disturbed.

Two news sources in the US and Israel had suggested that military action might have been a factor: in fact a shift in the prevailing winds at the time meant that the dust, once in the air, lingered across a large area of the Middle East. And, the researchers suggest, it may be a foretaste of things to come.

“If the cause of the storm was human conflict, then when the conflict ends, the causes go away, and that’s all good,” says Dr Bou-Zeid.

“But if the cause was not conflict and is more climate, and this is due to climatic conditions that are going to become more frequent in the future, then this is something that will reoccur.” – Climate News Network