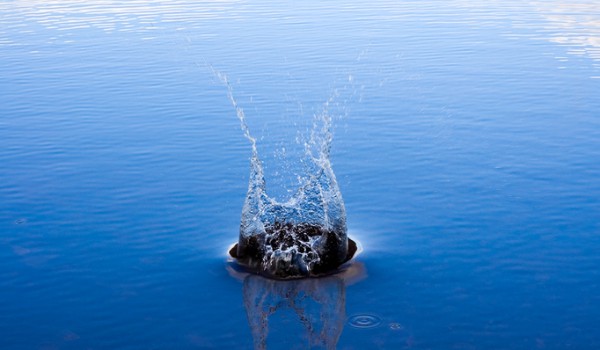 As each student enters D107 I hand them a stone. Actually a big rock, that I stole from the neighbor’s yard, and my son Dante graciously washed (or shall we say baptized?). This is their burden to carry, at least during my class, but I refuse to explain.

I’m teaching reconciliation today to thirty upper-class high school students, the sacrament, and the concept, I’m aiming for some sort of experiential knowledge on all fronts – physical, intellectual, and heartfelt. May the force be with me…

My opener goes something like this, “What does the airline steward ask you to do with your oxygen mask during an in-flight emergency?”
It is amazing how enticing it is to raise your hand when you know the answer. I open it to the floor and several students shout out, “put your mask on first before helping others.”

They look at me like I’m daft, “because you’re no good to anyone else if you pass out.”

“Exactly, and it is the same with forgiveness.”

This is when I get push back, “What does forgiveness have to do with oxygen?”

“You have two minutes to figure it out. Go.”

Eventually someone comes up with the idea that we have to forgive ourselves before we can forgive others. Bingo. And the lesson begins.

I invite the students to find a comfortable spot on the carpet and have them place their stones (burdens) on their chest. I take them through a few relaxing breaths and than James Fielden narrates a meditation on forgiveness. He has an incredibly soothing voice and leads us through a series of redemptive options. He helps us remove the sinful act from the present moment, by visualizing the distance between you (present), and the act (past).

It offers one the necessary space to let go of pain and suffering. He starts with forgiving oneself, moves on to forgiving others, and then extends the concept of forgiveness out into the world. When the meditation is over I have them release their heavy burdens from chest to hand.

Carrying our rocks, we move to a gallery activity, to explore vocabulary, scriptural evidence, and church teaching on reconciliation. But that is not were our lesson ends, because for something to be applicable you have to experience it on multiple levels, internalize the concepts, feel it deep down inside.

It says in Ephesians to let all bitterness, wrath, anger, clamor, and slander be put away from you, along with all malice. We are called to be kind to one another, tenderhearted, and forgiving. Making reconciliation applicable to teenagers is tricky but I believe it might be worse with adults.

I ask them to hold their rocks as I read the story of the adulterous women in chapter 8 of the Gospel of John. I love this particular scripture because it sheds light on the complexity of forgiveness. A woman caught in adultery is taken to Jesus, the punishment for adultery is stoning to death, but Jesus brilliantly turns the table on those carrying stones. I linger with the famous line, “He that is without sin among you may cast the first stone.” We discuss the issue of sin and how it is directly related to judgement. Jesus knows our human nature and without breaking any tribal laws he moves us into a place of deeper self-awareness, maybe even empathy. It is one of my favorites.

Can I just add, whenever I flagrantly judge someone, I almost always end up in their shoes. It’s practically guaranteed. The minute I hear words of judgement coming out of my mouth, I shut that talk down, and give myself a time out. For example, when I complain about road rage, inevitably someone will cut me off, and I end up cussing like a sailor. I will callously judge your addictions, without considering my own, publish my dream weight on my driver’s license instead the truth, and steal opinions when I haven’t taken the time to form my own. I could go to daily confession but it wouldn’t be enough. The truth is the things I like least about myself are the very things I see in you. It says in Luke not to judge, and you will not be judged, not to condemn, and you will not be condemned, to forgive, and you will be forgiven. I think we need to get the word out!

After a brief review of the ten commandments we discuss mortal (major) sin and venial (minor) sin. Sin is born of knowledge, because to sin you must know what you are doing is wrong, and decide to do it anyway. Venial sins include losing your temper, taking rocks from your neighbor’s yard, or wishing evil upon someone you don’t like. Sin is defined in the catechism as “an utterance, a deed, or a desire contrary to the eternal law.” Mortal sin is different, because it is difficult to understand forgiveness when confronted with evil on the level of murder, rape, child abuse, and terrorism. These are complicated issues and difficult to process. We soak in these conflicts for a while, admitting the ability to forgive might benefit us more, than the person needing forgiveness. Why did Pope John Paul II forgive the man who tried to assassinate him?

Who do we cast stones at today that deserve our empathy instead of our judgement? Almost no one mentions adultery, it’s more about racism, sexual orientation, citizenship, gender, ethnicity, religious affiliation, social economical status, political preference, homelessness, age, and so on. While Jesus languishes on the cross he asks God to forgive his tormentors, “because they know not what they do.” Jesus is God, and God’s last words are ones of forgiveness, possibly the most important concept proclaimed in the gospels.

Real peace is not just a matter of structures and mechanisms. It rests above all on the adoption of a style of human coexistence marked by mutual acceptance and a capacity to forgive from the heart. We all need to be forgiven by others, so we must all be ready to forgive. Asking and granting forgiveness is something profoundly worthy of every one of us,” said Pope John Paul II.

How do we bridge modernity and structural sin? I end with a reading of The Lottery by Shirley Jackson (published in 1948), concerning the practices of a small town. [Spoiler alert: read linked story first or you’ll want to stone me] The entire story serves as an allegory for Jackson’s larger message that individuals must remain vigilant in their actions and beliefs, in order to ensure that they are not simply adhering to outdated traditions, ideas, rules, laws, and practices. For as long as the villagers can remember, every year in the month of June, a lottery is hosted in the town square. Everyone participates, selecting a card from a tattered black box, the person who ends up with the marked card, wins the lottery, and is stoned to death by the citizens of the town. The story ends with the villagers stoning poor Ms. Hutchinson while she yells, “it’s not fair, it’s not fair.”

As the bell rings we toss our stones back in the basket, with the realization that life is not fair, but we are called to love, not cast stones.

This post was previously published on Living in the Gap and is republished here with permission from the author.