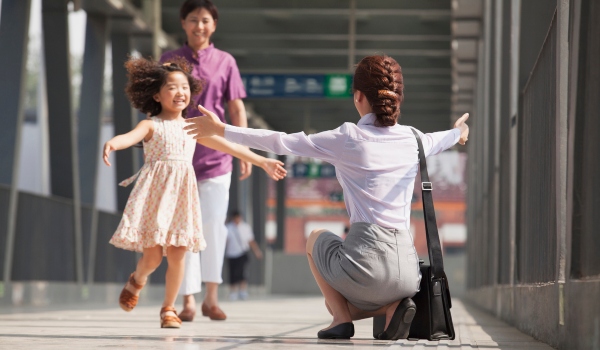 Working in Indonesia’s capital, Jakarta, is hard. Besides long working hours, Jakartan workers have to face the notorious long commuting times and traffic jams, known as some of the worst in the world.

For working mothers, it is even harder.

They wake up before sunrise to prepare breakfast for the family. Then they leave their children to babysitters or grandparents, and squeeze themselves into packed public transport or brave the heavy congestion to go to work.

In the end, research finds, they must let their career go due to the huge cost they have to bear.

One of the research’s respondents, identified as Nila, a 29-year-old mother of two toddlers in Depok, Greater Jakarta, is one example.

“I got tired of leaving home early and coming home late, plus I’d have to do the housework too,” she said. “I cannot see where my wages went because going to work is costly. I cannot see the fruits of my labour, so I’d rather be at home.”

Too costly to work

Women quitting their jobs after having a family is an everyday story in Indonesia.

One main reason is the expense of going from their houses in the suburbs to offices in the city centre.

The commuting cost is high, particularly for young middle-class families, as they usually choose to live on the outskirts of Jakarta to obtain a decent house at an affordable price.

The gender norm that requires married women to look after the households magnifies the cost for women and, as a result, women choose to leave the labour market.

Women have a more complex commuting pattern due to their dual roles. In a day, women could make several trips, from dropping and picking up children from school or childcare centres to shopping and going to work.

This means women spend more when travelling by public transport.

In a recent qualitative study of married women with young children in Greater Jakarta, long commuting time was found to add to the opportunity cost for women to have a career. The opportunity cost means the value of time that women must give up at home to join the workforce.

The lack of policies supporting mothers drives such high opportunity cost. Current policies provide only short maternity leave and there is a lack of trusted childcare services and flexible working arrangements.

A study found that new families buy their first house when they want to have children.

In Indonesia, many still believe one needs a house to raise a family. Buying a house is associated with having autonomy as compared to renting.

However, young couples are usually still in the early stages of their careers. They are less likely to afford housing close to their workplaces as property prices in the city centre are high.

However, lower house prices are offset by higher commuting costs due to the long distance to and from the city centre where the workplace is located.

Nila’s story suggests commuting costs hits women harder than men. Not only do high travel costs hurt women’s income, the long travel times also reduce their time to care for their children and do housework.

Either family or job

Despite the narrowing gender gap in higher education, women are still bound by traditional gender norms. Society expects women to be mothers and wives rather than having a career.

The labour force participation rate of females aged 15 years and older in Indonesia has stagnated around 50% for the last decade. The figure for Jakarta is even lower – 48.47% in 2018. 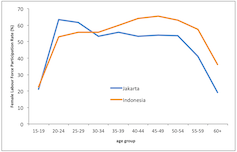 However, the data indicated that Jakartan women’s chances to participate in the labour market become smaller once they have children.

Unlike other Indonesian women, Jakartan women seem to be out of the labour market for the rest of their life.

The highly competitive formal sector dominates Jakarta’s economy. So, women with years of non-employment episodes will find it harder to return to the labour market as they have less working experience.

A study in 2017 indicated that reducing transport costs might not be the main solution to increase women’s participation in the labour market in Jakarta, but it could help.

Developing an integrated transportation system in Greater Jakarta with more public transportation options will not only reduce the congestion but will also cut commuting time.

President Joko “Jokowi” Widodo has issued a plan involving different ministries and both local and central government to develop an integrated urban transport network in Greater Jakarta by 2029.

The implementation of the plan will help working parents better manage their time for childcare and domestic work as it reduces their commuting time.

Responding to the 2017 study, current efforts to stop women from quitting their jobs focus more on reducing the burden of child-rearing. These steps include opening childcare services and providing flexible working hours as well as paternity leave.

However, as long as the problems of long hours and costs of commuting still exist, those policies will not work.