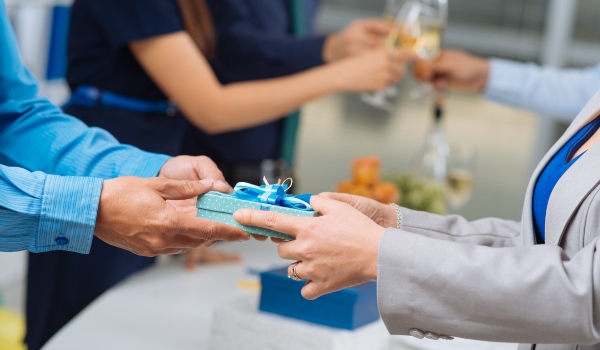 —
On the occasion of the opening of the Buddhism exhibition, the British Library received a gift from the World Tipitaka Foundation, Thailand, of the Buddhist canon in the Pali language. The recently published threefold edition consists of 120 volumes altogether. The official handover ceremony on 24 October 2019 was attended by representatives from the World Tipitaka Foundation, the Royal Thai Embassy in London and members of the Library’s senior leadership team who expressed their gratitude for this generous donation. All 120 volumes are currently on display in the Buddhism exhibition and will be added to the Library’s Buddhist collections after the exhibition closes on 23 February 2020.

The Buddha’s word was initially transmitted orally. After the Buddha’s physical passing and attainment of parinirvana, his disciples and later followers gathered in several councils to recite and preserve the Buddha’s teachings. It is thought that in the first century BCE, during the fourth Buddhist council held in Anuradhapura in Sri Lanka, an early version of the Buddhist canon was written down in the Pali language. The Pali canon, or Tipitaka, is regarded as the corpus of Buddhist scriptures closest to the original words of the Buddha. It consists of “three baskets” of teachings: the Sutta Pitaka (discourses of the Buddha), the Vinaya Pitaka (monastic discipline) and the Abhidhamma Pitaka (further teachings). Each of the major Buddhist traditions has their own body of scriptures that may differ from others in contents, number and order of texts. In Sanskrit, the corpus of canonical scriptures is known as Tripitaka. A complete set of scriptures of the Buddhist canon can include from around 40 volumes in the Theravada tradition to 108 in the Vajrayana tradition and over 200 volumes in the Mahayana tradition. Maunggan gold plates
Text fragments from the Tipitaka in Pali, written in Pyu script, on gold plates which were excavated at Maunggan, Burma. Pyu kingdoms, 5th century. British Library, Or.5340/A–B Noc

The oldest extant text fragments of the Pali Tipitaka in form of Pyu inscriptions on gold plates date back to around the 5th century CE. They were excavated at Maunggan, Burma, in 1897. The Pali Tipitaka was transcribed into Sinhalese, Burmese, Khmer, Thai and Northern Thai, Lao, Shan and other scripts of Southeast Asia. In the nineteenth century Western scholars together with monks from Sri Lanka began to Romanise and to translate scriptures of the Tipitaka into English and other European languages. The first Romanised publication of the Jataka tales from the Sutta Pitaka by V. Fausbøoll and R. C. Childers appeared in six volumes between 1875-1896.

The world’s first printed set of the Paḷi Tipiṭaka was the 39-volume Chulachomklao of Siam Paḷi Tipiṭaka Edition which was commissioned by King Chulalongkorn Chulachomklao of Siam (Rama V) in B.E.2463 (1893). After six years of preparation under the leadership of the Buddhist monk and scholar Vajiranana Varorasa, the king presented 500 sets of this historic edition to Buddhist monasteries all over the kingdom of Siam (now Thailand). More sets were presented later as royal gifts to 260 leading institutions all over the world. These royal gifts of Tipiṭaka in Pali language printed in Thai script have been discovered still held at libraries in 30 countries.

Front cover of a volume of the 1893 Chulachomklao of Siam Paḷi Tipiṭaka Edition with the royal coat of arms of Siam used by King Chulalongkorn (Rama V) embossed in gold. Photo courtesy of the World Tipitaka Foundation

In 1956 an international Buddhist Council held in Burma brought 2500 erudite monks of the Theravada tradition together and resulted in the publication of the Chatthasangiti Council Edition containing the Pali Tipitaka in Burmese script. Based on this edition, a Romanised version was edited on the initiative of the Supreme Patriarch of the Sangha of Thailand, Venerable Vajirananasamvara, who himself had attended the Buddhist Council in 1956. The work was published by the World Tipitaka Foundation in 2002, comprising of forty volumes with the title Mahasangiti Tipitaka Buddhavasse 2500.

Front cover of a volume of the 2016 Queen Sirikit’s Sajjhaya Pali Notation edition with the emblem of Queen Sirikit, the Queen Mother of Thailand. Photograph courtesy of the World Tipitaka Foundation

Based on the Pali Tipitaka edition in Roman script that was completed in 2002, the World Tipitaka Foundation published two further 40-volume sets of the Tipitaka specifically for the correct pronunciation and recitation of the Pali text. The King Bhumibol Adulyadej’s Sajjhaya Pali Phonetic and the Queen Sirikit’s Sajjhaya Pali Notation editions, published in 2016, are the culmination of half a century of international efforts to preserve the words of the Buddha. The use of sound technology made it possible to record the recitation of the Pali texts, amounting to 3,052 hours. A special feature of the digital Sajjhaya recitation is the sound technology reference, which electronically refers to any one of over nine million Pali syllables in the Tipitaka to the Kaccayana Pali grammar, the oldest grammar used in ancient Pali literature. Digital recitation samples are available online at www.sajjhaya.org/node/26.

The presentation of the Romanised version of the Tipitaka together with the Sajjhaya Pali Phonetic and the Sajjhaya Pali Notation editions to the British Library as a Dhamma gift from the World Tipitaka Foundation heralds a new era of sharing ancient Buddhist wisdom and making the Pali Buddhist canon available to a wider audience in the UK.

Display of the threefold edition of the Pali Tipitaka in the Buddhism exhibition, with (from left to right) Mrs Thipayasuda Suvanajata, Dr Lalivan Karnchanachari, Mr Phornsake Karnchanachari (Patron of the World Tipitaka Foundation) and H.E. Mr Pisanu Suvanajata (Ambassador of Thailand in the UK). Photograph courtesy of D. Meng.