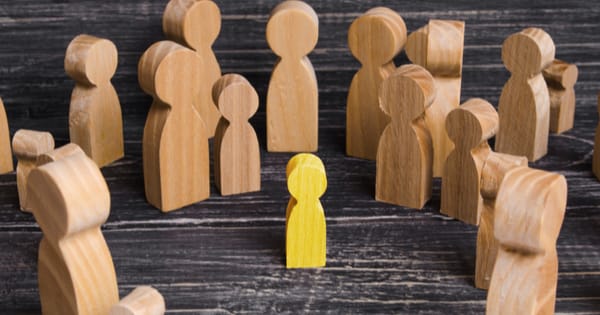 Ahhh…loneliness. Not the cheeriest of subjects to be writing about during the holiday season. But if you have recently (or not so recently) experienced the loss of a loved one, you may not be eagerly anticipating the most wonderful time of the year…without them.

And to be perfectly candid, I may not be the best person to be writing about loneliness in the wake of loss because the truth is, after my husband John’s death, I didn’t really experience very much of what I would call loneliness.

At least, not when I was alone.

Yes, I missed him terribly and I was an emotional and psychological basket case for months. But when it came to feeling “lonely,” I figured something out about myself pretty quickly: more often than not, I felt better (relatively-speaking) when I was alone—with just my dog, my thoughts and my memories—than I did when I was with other people, especially large groups of people.

Now, there were exceptions to this, of course. I was extremely blessed to have several key people who I could talk to…and believe me, I did. They became the life preservers that, slowly but surely, pulled me from the depths of grief to the shore of a new life. Even though I WAS alone (I was a widow with no children and lived on my own), I could never have navigated my way through the grief without the help of others.

But here’s the thing: as the Robin Williams quote suggests, my loneliest moments in the weeks and months (and who’s kidding who, years) following John’s death occurred when I was with people who I didn’t feel comfortable talking to about John—or about what I was experiencing, trying to come to terms with his death.

Those were the times I felt a horrific loneliness…like I was standing on one side of the Grand Canyon and that person (or group of people) was on the other side—and John was somewhere in the middle, at the bottom of the Colorado River flowing away from me as fast as could be.

Yes, I had already lost him. But when people began to stop talking about him (which inevitably happens but boy does it hurt), it felt as if he was really gone…not just the man but the memory, too.

Life goes on—we all get that. But when a loss has shattered the very core of our being, we need time to process that loss and begin to heal. And in order to do that, we need to do everything in our power to surround ourselves with the right people…or no one at all, if that feels best.

Be careful about saying yes to social events out of obligation.

To illustrate the importance of staying clear of situations that may not be the best fit for our current emotional state, this passage from my book, A Widow’s Awakening, happened two months after John’s (“Sam”) death:

Tonight is the annual Christmas party for Sam’s team and Tom invited Nick, Angela and me. I said yes, thinking it might be nice to carry on the tradition—and because I should go. For I am The Cheerful Widow whose job it is to make everyone else feel better by pretending I’m A-OK. In public, I’m the smiling little trooper who asks lots of cute questions. Back home, I’m weaving the answers into a dangerous rope into which my own neck might fit quite nicely.

At the Christmas party, I soon realize that being the widow of a fallen officer watching her dead husband’s teammates trying to party is a like a drug addict in rehab, watching other addicts shoot up. I’m not emotionally equipped to observe the reality that life is going on without Sam. So off to the buffet I waddle.

With a heaping plate of food in one hand and a beer in the other, I find a seat in the living room and a woman I’ve never seen before sits beside me.

“Ummm . . . my husband was the police officer who just passed away.”

“Oh now, which one was that?” she says loudly, waving her wineglass. “There’s been so many lately, I get them all mixed up!”

Ouch. I could have punched her for making such a callous remark. In hindsight, I wish I did. But for the purpose of this article, my point is this: when you are in an extremely vulnerable state, you have to be very careful about the situations you sign up for and the people you surround yourself with.

In this next excerpt from A Widow’s Awakening, two more weeks have passed (I am “Adri”):

What I don’t remember about the film is that the main character is a widower who carts around a photo of his dead wife. At one point, he’s sitting in his car during a snowstorm chatting away to her. Sitting on Sam’s perch, surrounded by pictures of him, I can certainly relate. The dead are often better companions than the living. I’m far happier staying at home alone, talking to the walls than I am venturing out into the world and hearing what the mortals have to tell me. For as the two-month marker of Sam’s death approaches, I’m noticing a definite shift in the clichés coming my way.

‘You’re young, dear,’ is a popular one from the over-fifty crowd.

‘I’m so sorry,’ is being replaced by an oddly enthusiastic, ‘Well, at least you didn’t have children!’

That’s right, you morons: now I don’t have a husband OR a child.

And my all-time favorite, occurring with alarming frequency and frightening conviction, is:

‘Losing a spouse isn’t as bad as losing a child.’

‘GRIEF IS NOT A PISSING MATCH!’ I scream at the water fountain when I get back home again.

Then there are the dozens of people who take my hand and softly confide, “Adri, I just want you to know that your loss has really made me appreciate what I have.”

I’m so pleased my nightmare could be of assistance to you. Not.

In other words, I finally figured out that spending time with strangers—or with familiars who didn’t know what to say—was doing me far more harm than good. Although the ridiculous comments made by others were not intentionally cruel or rude, they still hurt.

Regardless of whether one is experiencing loneliness while alone or in the company of others, the fact is: loneliness leads to isolation. And the more isolated we feel, the more isolated we become and then the more treacherous our path becomes because we are far more prone to turn to unhealthy coping mechanisms, such as substance abuse or dangerous thoughts, in an attempt to bridge the gap between ourselves and others. But unhealthy coping mechanisms won’t bridge the gap—they only widen it.

Choose Wisely Who You Surround Yourself With

To find a person who can truly listen is a tremendous gift. It’s also one of the trickiest things to find because a good listener is a rare gem indeed.

If you have recently experienced the loss of a loved one, when it comes to loneliness, my advice is this: be VERY careful who you spend time with. Choose wisely.

And how do you know if you have chosen well? By how you feel when you part ways. If you feel better—if you feel you have been heard—you’ve got a keeper. If you feel worse, stay clear of that person or people until you are more emotionally equipped to handle them.