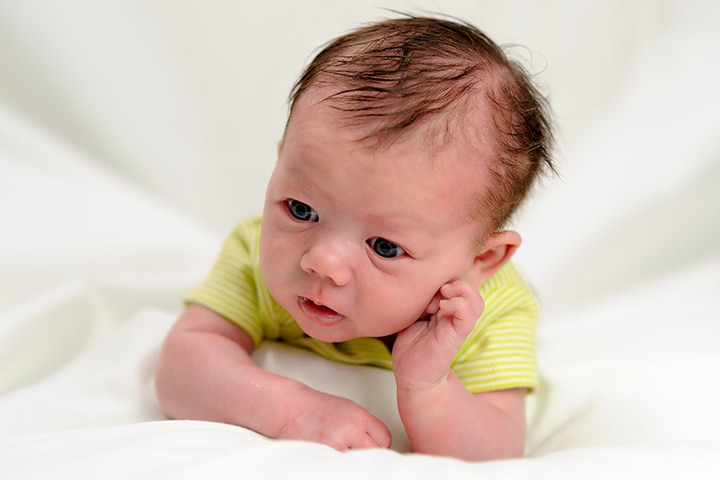 Usually, babies shake their heads as a part of interaction or while playing. Older infants often respond to questions or communicate by shaking their heads. Though the head-shaking in babies is normal, sometimes it could be a sign of neurological or developmental disorders.

Read this MomJunction post to know more about the normal and abnormal causes of head-shaking in infants and how to deal with it.

If you notice your baby is happy and healthy, then head-shaking is nothing to worry about. Here are a few usual reasons why your baby may shake their head.

Once your baby’s neck muscles are developed, they test their ability to hold up and move the head. It is a part of normal development. Usually, by the end of the first month, babies start moving head side to side. By the age of two months, they can raise their heads while on their tummy (1). It may be jerkierinitially due to developing muscle control.

Babies may shake head side to side as a part of self-soothing. It can be a natural tactic to calm themselves down to sleep. You may notice this behavior right before your little one falls asleep.

While breastfeeding, babies may shake their head to latch. It can be one of the first head movements babies may make. During nursing, they might also shake their head due to excitement. Though your baby may support and move their head side to side, you should support their head while feeding until the age of three months.

Babies start to move their heads as a part of the play or towards sounds in the initial months. It can be a part of interaction in the early years of life. You may notice increased head shaking when your baby is excited.

A baby may use head-shake as a mode of non-verbal communication. As the baby grows older, they may shake their head along with making sounds to express emotions or demand something.

Baby Head-Shaking Causes That Are Not Normal

If head-shake is associated with other physical and behavioral symptoms, then it could be due to developmental problems or certain medical conditions. You should contact a pediatrician if you notice any of the following with head-shaking in your baby.

If you notice cold, fever, tiredness, and ear tugging a long with head-shaking, then it could be due to ear pain or discomfort caused by an ear infection (2).

Babies with autism tend to shake their head involuntarily. Frequent headbanging is also characteristic of this disorder. In such cases, check for these associated behavioral traits.

Early diagnosis of autism disorders may improve the quality of a child’s life due to early interventions and less parental stress (3).

Myoclonic head jerks or spasm can be seen in babies during epilepsy. This may be due to neurological disorders (4).

It is a disorder where babies do head-bobbing, with rapid eye movement called nystagmus. Sometimes, they may hold their neck in an abnormal position. This condition usually occurs between four months and one year of age and resolves later in life (5).

Shaking of head side-to-side during sleep can be a symptom of rhythmic movement disorder (RMD). It is a neurological disorder with repeated movement of large muscles before or during sleep, especially in infants. It usually involves head and neck movements and has the following associated symptoms (6).

This condition might be genetic since it is often seen in families and among twins. Seek a doctor’s opinion if you suspect RMD.

When To Consult A Doctor?

You may consult a pediatrician if you notice any of the following events, along with head shaking.

How To Stop Babies From Shaking Head?

Shaking head may cause dizziness and disorientation in babies, and it may result in falls. It might also increase the risk of hitting the crib, table, or wall. You may follow the following tactics to prevent your baby from head-shaking.

Shaking of the head by a baby is usually a normal developmental milestone. If your baby does not shake their head at all or tends to shake them obsessively, then it might be a sign of a problem Consult a pediatrician before jumping to conclusions if you think your baby is shaking their head abnormally.

When did your baby start to move their head? Let us know your experiences in the comment section below.