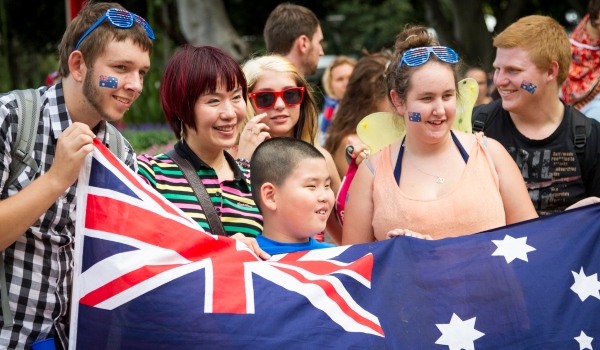 Australians celebrated Australia Day on January 26, an annual national holiday marking the arrival of British settlers to the Land Down Under over two centuries ago. The day tends to draw mixed emotions, as Indigenous Australians refer to the event as Invasion Day, recalling the day their lands were invaded by Britain.

Australia Day is often a low-key event passed under the summer sun, with families and friends enjoying a barbecue and beer before the reality of the working life and school sinks back in.

However, this year’s Australia Day witnessed a boom in patriotism and debates about Australian identity. Australian flags were unusually omnipresent throughout the country, a new for celebrating the national holiday. Miniature flags could be seen on cars, in shops, and at the front of houses. Twitter also felt the boom in Australian patriotic pride, with Happy Australia Day becoming a Trending Topic for several hours during the day.

The following tweet summarizes the mood of the national holiday:

Meg Mclachlan @megasaurus_x: @Pink Happy Australia Day for yesterday! I hope you had a little flag to celebrate the country that LOVES you most. I had a VB in ur honour!

Some Australian bloggers were bemused by the excessive display of patriotism yesterday, including the following from Eva Cox on Crikey!:

It is this misuse of symbols, mixed with excessive patriotism that is making me anxious about what this holiday has become. It seems to have started shortly after the Bicentennial but has escalated into an ever more problematic symbol of the splintering of identities. How did we manage to change this holiday into a celebration of something that we used to think was a bit naff?

Five years ago that Cronulla [race] riots became a new benchmarks of a particular type of nationalistic thuggery. The flag is everywhere! This is not local developed change but imitates the USA, which is always flying flags and has a flag day! I object to flags on cars, on faces, on T shirts on towels and probably on condoms! The Cronulla pictures should warn us that such misuse of symbols is both tasteless and dangerous as it allows for the type of mindless mob rule that feeds into totalitarianism.

Nationalism and patriotism have their place in our histories and present but should not ever be used as rallying points for including and excluding groups on the basis of tacky assumptions of loyalty and commonalities. I can appreciate living in Australia without a need to indulge in hyperbole. Concepts like ‘Australian’ values are hard to define, as most seem to be what we would expect in any reasonably civilised community.

Until yesterday, the only time I ever really celebrated Australia Day was when I lived in London. Since then I have been among the cynical, criticising over the top patriotism, lamenting that January 26 marks the invasion of Aboriginal Australia and cringing at recent phenomenon of our national day becoming an excuse for people to freely express their xenophobic views.

As I ended Australia Day at a Vietnamese restaurant in St Albans, I thought about how much fun I had doing things we can take so much for granted. This is what Australia Day should be about. Rather than hijack it to highlight our problems and political agendas – which we can do any day – we should use it to reflect on the great things about Australia and being Australians. It shouldn’t be a day of guilt, nor should it be one of nationalism or social exclusion.

Not all posts were negative about the national holiday, with the following from a Sydney taxi driver/blogger, Cablog, recounting his Australia Day at work:

Early this morning a drunken passenger remarked, “Australia Day? I don’t even know what it is we’re actually celebrating.” To which his mate replied, “Doesn’t matter, we’re sure as hell are going to start it off with a bang, eh?” And they both laughed in anticipation.

Whilst they were of Anglo heritage this salutation was extended by various nationalities last night, including non-citizens. At dinner the Turkish proprietors wished me a Happy Australia Day, as did two female baristas during the shift, an Argentinian and a Columbian.

This was the instructions issued by King George III to Governor Phillip for establishing the first white settlement. Founding principles which contrast with the view that white settlers were merely marauding invaders with little regard for the indigenous.

These laudable intentions of the Crown towards the aborigines are therefore one thing worth celebrating on this day. Something I could have explained to my aforementioned passengers, puzzled by Australia Day whilst awaiting their gram of coke.

Australia Day also had its fair share of controversy, including the Great Australian Internet Blackout. Hundreds of Australian websites blacked-out on Australia Day as part of an ongoing campaign against the Australian Government’s plan to impose a Chinese-like mandatory internet censorship filter.

Symod J. Urich @symodhcn: So Australia is the next China obviously. Happy Australia Day! Wish you didn’t have such government… #thegreataustralianinternetblackout

The mixed reaction to Australia Day reveals a young nation still finding its feet and purpose. It is indeed still difficult to define a unified, inclusive Australian identity. Trying to reconcile an Aboriginal ancestry, a white Anglo-Saxon colonial past and a multi-cultural present is no easy task. Admittedly, it leaves us all guessing.