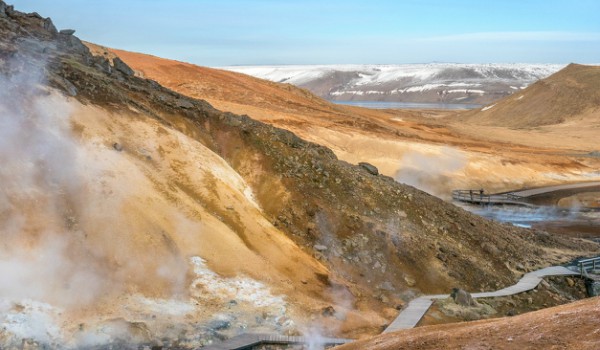 LONDON, 9 May, 2019 − The permafrost may be about to spring an unwelcome surprise, with Arctic soils thought to be thawing faster than anyone had predicted. This threatens to release vast quantities of frozen methane into the atmosphere and transform the northern landscape.

One-fourth of all the land in the northern half of the globe is defined as permafrost. This long-frozen soil is home to the detritus of life over many thousands of years: the remains of plants, animals and microbes. The permanently frozen soils of the region hold, so far in a harmless state, 1,600 billion tonnes of carbon: twice as much as exists in the atmosphere.

And as the Arctic warms, this could release ever-greater volumes of a potent greenhouse gas, to accelerate global warming still further, and the consequent collapse of the soil, the flooding and the landslides could change not just the habitat but even the contours of the high latitudes.

“We are watching this sleeping giant wake up right in front of our eyes,” said Merritt Turetsky, an ecologist at the University of Guelph in Canada.

“We work in areas where permafrost contains a lot of ice, and our field sites are being destroyed by abrupt collapse of this ice, not gradually over decades, but very quickly over months to years.”

And Miriam Jones, of the US Geological Survey, said: “This abrupt thaw is changing forested ecosystems to thaw lakes and wetlands, resulting in a wholesale transformation of the landscape that not only impacts carbon feedbacks to climate but is also altering wildlife habitat and damaging infrastructure.”

The two scientists are among 14 researchers who argue in the journal Nature that the thaw is happening far faster than anyone had predicted. The Arctic is warming at a rate faster than almost anywhere else on Earth.

So far the thaw affects less than one-fifth of the entire permafrost, but even this relatively small area has the potential to double what climate scientists call “feedback” – the release of hitherto stored greenhouse gases to fuel yet faster warming.

It is the latest in a series of increasingly urgent warnings about the rate of change in the Arctic.

Stable climate patterns are maintained by stable temperatures. As the polar north warms twice as fast as the average for the rest of the world, the all-important difference between tropics and polar regions begins to accelerate the advance of spring, and delay the next freeze to bring weather extremes and ever higher sea level rises which could soon start to exact a toll on human economies on an unprecedented scale.

Researchers have been warning for years about the consequences of thaw and the release of ever more carbon into the greenhouse atmosphere.

But it is only in recent months that climate scientists have begun to see the effect of ice melt at depth upon the soils that – for now – support Arctic roads, buildings and pipelines as well as a huge natural ecosystem of plants and animals adapted by thousands of years of evolution to long winters and brief flowering summers.

Put simply: 195 nations met in Paris in 2015 and agreed to contain average global warming to “well below” 2°C above the long-term level for most of human history. Accelerating thaw in the Arctic puts that goal at risk.

“We can’t prevent abrupt thawing of the permafrost, but we can try to forecast where and when it is likely to happen, to enable decision makers and communities to protect people and resources”, the scientists write.

“Reducing global emissions might be the surest way to slow further release of permafrost carbon into the atmosphere. Let’s keep that carbon where it belongs – safely frozen in the stunning soils of the north.” − Climate News Network