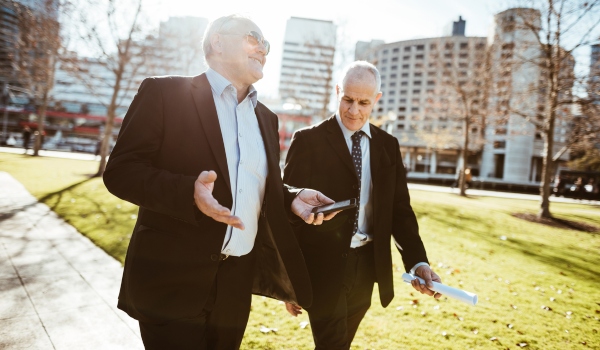 As young oncologists working in a Sydney cancer hospital, Dr Raghav Murali-Ganesh and Dr Nikhil Pooviah observed first-hand that patients who had the best information systems and support networks had better outcomes.

This sparked the idea for an app that, just a few years later, is helping to improve the lives of more than 25,000 patients in 53 countries.

“People who came in with family members and a ring binder, that sort of system in place with a support mechanism, anecdotally tended to do better, and we were able to prescribe more treatment and they were able to tolerate and manage the side effects better,” Murali-Ganesh says.

From paper to the screen

When patients are trying to cope with the devastating shock, fear and overwhelming emotions of a cancer diagnosis, they can struggle to remember details, he says.

“I used to give patients a piece of paper and ask them to write down all the medications they take, and whenever they have pain, put it on their fridge and use it as a diary, and bring that piece of paper with them to every appointment.”

From those notes, Murali-Ganesh could see whether he needed to change a patient’s medication or if they needed extra support at home.

Murali-Ganesh and his colleague Pooviah wanted to add to that advantage using digital technology, improving on the “antiquated” system of paper record cards and printed pamphlets commonly used.

Within a year, the Australian doctors had created CancerAid.

The app allows patients to access personalised, medically reliable information about cancer; track their symptoms, feelings and appointments in a journal; nominate friends and family members who will support them; and access a news feed with information and supportive advice and a community of cancer patients and their caregivers.

It’s this last function that has proven to be the most “sticky”: where patients spend the most time.

“Patients really like connecting with other people who have gone through similar experiences,” Murali-Ganesh says. “Instead of just hearing from the doctors and nurses about how they should feel, hearing from other patients and what they’ve gone through is very powerful.”

Patients can log cancer or treatment related symptoms within the app from anywhere, even while receiving chemotherapy, making it a “low-friction” task which recent randomised evidence has revealed, ultimately could improve their survival.

Patients have described the app as invaluable and empowering.

From oncologist to app developer

Launched on the Apple store in August 2016, within 12 weeks CancerAid was ranked the number one cancer app in Australia, the US and the UK – a position it stills holds.

One in six deaths worldwide are caused by cancer, making it the second leading cause of death globally. The team has received requests for Chinese, Spanish, French and Dutch CancerAid versions and is hopeful this will be a reality by late-2018.

The app will always be free for patients, Murali-Ganesh says. The business model relies on charging hospitals to integrate CancerAid into their electronic medical records, allowing cancer care teams to access patients’ symptom diaries. The benefit for hospitals is fewer admissions, lower costs and the ability to provide improved quality care.

The CancerAid team is based at Chris O’Brien Lifehouse, a cancer hospital and clinical trial centre in Sydney, and in the US. It is also where Murali-Ganesh completed his training in radiation oncology.

“COBLH is a very innovative hospital (robotic surgery, integrative medicine etc) and strives to be one of the top cancer hospitals in the country. The CEO, Eileen Hannagan is a great visionary and strong supporter of CancerAid, and she really understands why innovation is important in the healthcare industry.”

“We’re lucky in the fact that we’re based inside a cancer hospital. We have ready access to patients and we’re at the coalface in terms of developing technology that allows us to continually make a product that patients will find useful.”

Murali-Ganesh works full-time at CancerAid with the team of 15, but says he misses working as an oncologist with patients. “But I have the ability to reach thousands of patients, rather than tens or hundreds of patients so I’m quite privileged in that way, and very lucky to be able to do that.”

Further innovation in the pipeline

Murali-Ganesh says they have been approached several times about making a similar app for diabetes, stroke and heart disease.

The developers have a long list of further developments, including harnessing artificial intelligence (AI) and machine learning. “I think we’re just on the surface of where the technology is and where we can go with it.”

One potential addition is incorporating wearable technology that can track pulse and temperature, which for patients on chemotherapy who have compromised immune systems can indicate the first sign of infection.

Murali-Ganesh says Australia “will always be home” and they have no intention of moving the company.

“The Australian Government is fantastic at providing incentives for the technology team to be in Australia.

“There are some notable Australian success stories in MedTech including ResMed and Cochlear which have Australian roots but a global presence.” And, he adds, “Australia has a fantastic health system that provides an extremely high quality of care to patients.”

This post was previously published on Australiaunlimited.com and is republished here under a Creative Commons license