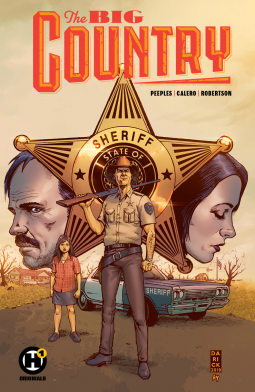 This month, Humanoids — the Los Angeles-based publisher of some of the world’s most groundbreaking science fiction and fantasy graphic novels— is publishing Peeples’ graphic novel debut THE BIG COUNTRY, a Texas noir about toxic masculinity and the cycle of violence, illustrated by Dennis Calero

In his remarkably candid personal essay he shared exclusively with The Good Men Project / All Things Geek, Mr. Peepels writes candidly about being abused as a child and the impact of violence and toxic masculinity. –

“The Coin of the Realm”

Everyday violence as inspiration for “The Big Country”

An essay by Quinton Peeples

I’d been on the floor for six or seven minutes, absorbing the kicks and blows that came from three boys who outweighed me by fifty pounds each. Initially, I tried to smile through it, as if it were some kind of mild hazing or a joke we were sharing, but this seemed to make them angrier.

Finally, the PE coach emerged and asked them to get dressed. The bell ending fifth period was about to ring and he didn’t want them to be late to their next class. He never spoke to me. I was ten years old.

I don’t remember now what I did to set them off. And it doesn’t matter. They didn’t need a reason. This was just the way life was. What they couldn’t have known, (or maybe they did, and we were alike in this way) was that I suffered the same type of abuse at home at the hands of my parents.

From the time I was five until I was thirteen, I suffered so many spankings, beatings and incidents of physical violence, I almost lost count. With a therapist’s help we roughed out a number nearing two hundred and fifty.

Until I was in my thirties, I thought this was normal.

The neighborhood I inhabited, the kids I grew up with, the people who surrounded me on a daily basis doled out casual violence with a kind of nonchalance that would be breathtaking in today’s culture. Part of my wanting to write my graphic novel “The Big Country” was to cast a glance back at a life that is, thankfully, fading. Or, at least, I hope it is. Part of me wonders if it’s just gone underground.

What is currently discussed as “toxic masculinity” would simply have been called “being a man” when I grew up. Violence was, and I would argue still is, the coin of the realm when it comes to male identity.

You should be able to take it and dish it out without hesitation. Your ability to endure it in the right way determines your value. Your choice of when, how and whose ass to kick is an indicator of currency.

Watch how often in contemporary media our “hero” throws a punch when his “girl” is threatened by another male. Would you have been disappointed if he simply had taken the young woman’s arm and escorted her to a less aggressive part of the bar? I bet you would have.

But let me clue you into something, a little insight gained from the personal experience laid out above – no one gets out of that violent moment without significant damage being done.

What television and movies avoid at all costs is the reality of violence and what it brings about in the human being, not to mention the sheer ugly physicality of it. It is never beautiful.

Someone’s teeth shattering, a broken jaw that swells and bruises instantly, an eye whose cornea is torn – that’s not Tom Cruise-worthy. It’s ugly and mean, and once you’ve been on either side of it, you are never the same.

And when it becomes routine, life around you begins to tilt into perpetual darkness. That’s the world of “The Big Country.”

The story of the graphic novel is invented, but the characters who inhabit it are all based on real people I grew up with.

The world they inhabit is the one I just laid out – a place where everyday violence has become routine. No one knows there is another way.

Each character suffers from being caught in a world that doesn’t question violence and its consequences. And when someone doesn’t respond in kind, they are viewed as suspect. To some of the citizens he serves, the protagonist, Sherriff Grissom Callahan, seems to have lost his edge.

He is a pale imitation of his father Clem, who was his predecessor. Grissom is chided and bears the psychic weight of “not being the man his father was”. That’s code for “You don’t know whose ass to kick.”

The entire novel revolves around how violence infiltrates and poisons both the private and public lives of the characters.

They are completely unaware of this, because, like me, they accept this as a way of life. Our culture is defined by the things we accept without question. And in “The Big Country” if you think getting kicked is something to smile about, you’re not worth talking to.

I’ll be reviewing and hope to interview the author in an upcoming All Things Geek.

The Big Country is available for pre-order at Amazon –

Quinton Peeples has been writing, producing and directing for television for over 30 years, including Runaways, Iron Fist, Flashforward, The Last Ship, Unforgettable and Hulu’s adaptation of Stephen King’s best-selling novel 11/22/63, as well as the film Woodlawn.