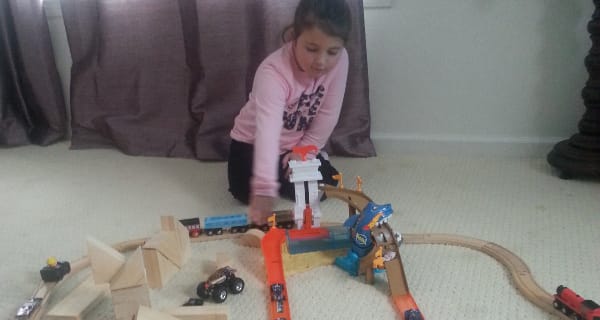 I love playing with my daughter. She’s funny, imaginative, enthusiastic, and even likes most of the same toys I do. She can be a little bossy and doesn’t always share as well as she should, but as long as she lets me win the occasional argument, we get along just fine.

Two weeks ago I was writing about record high temperatures and hikes that we were taking through the woods. Over the past four days we’ve been assaulted by record lows, stuck inside as helpful people on television warned that the temperature was preparing to fall to “dangerous levels.” Recovering from bronchitis and trying to keep her new cough from advancing to that stage, we took their advice. We were on house arrest. For four long days.

It led to a lot of playing. We played with cars. We played with trucks. Pirates, cowboys, knights in shining armor. We finally got around to watching The Lego Movie (awesome) and gave a go at some arts and crafts (pitiful). We built elaborate castles, racetracks, and villages, tore them down, and built them back up again.

The only thing I didn’t do is spend a single second by myself. My showers started getting longer, bathroom trips more frequent. Neither of these kept her at bay for long. Sitting, or sometimes even moving too slowly, meant an action figure thrust into my hand and a new story line beginning. Alaina is pretty good at keeping herself occupied while I do other things, but given the option she will always choose to have a playmate. The willingness of that playmate is often inconsequential. It doesn’t take long to run out of chores and excuses, especially with such a willing helper.

As I type this she is eating lunch and the temperature has jumped back up another fifty degrees. The strangest winter in memory continues and we should be able to get back outside soon. This afternoon February break ends and there will be a return to preschool. I don’t think that I’ll actually do a dance after drop off, but I’m not completely ruling it out. At the very least there may be whistling. Daddy is all played out for a few days.

This post was previously published on ThirstyDaddy and is republished here with permission from the author.