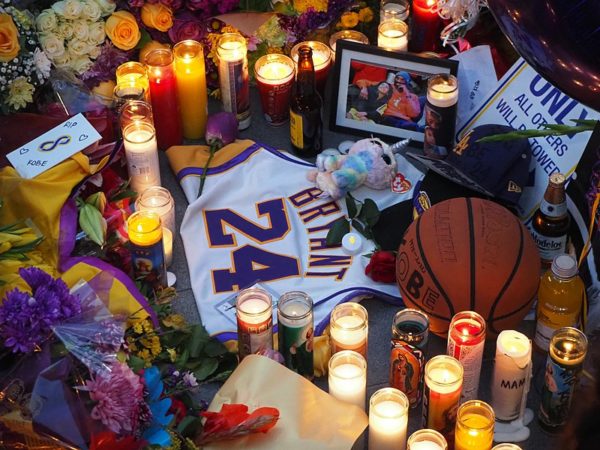 A twitter alert on my phone showed the news of Kobe’s death.  I felt like I’d been punched.  From bed, I tweeted, “RIP Kobe Bryant” and praised the 41-year-old former basketball player as “an inspiration to so many.” Similar comments torpedoed in. It was the first time in three years that I felt united with all Americans, going through this tragedy together.

Updates said eight others had died, including Kobe’s 13-year-old budding basketball star Gigi. Her poor mother. The number 13 kept looping in my head. I returned to Facebook to add Gigi’s name to my RIP post. A new comment from a guy I don’t know said, “I don’t wish harm on anyone and it’s tragic that this happened and that his younger daughter died. But please stop sanitizing his life.”

Before deleting the comment, I remembered the controversy and googled. In July 2003, when he was 24, Kobe allegedly raped a 19-year-old girl and lied about it until the cops confronted him with DNA evidence. The girl was badly bruised and bloodied due to vaginal tearing.

How could I have blanked on this?

I found a 57-page transcript of a police interview with Bryant. When a detective said, “We received a call and took a report of a possible sexual assault allegation,” Bryant’s response was jarring. He said, “What’s gonna happen?”

Kobe admitted to bruising her neck during sex.  “My hands are strong,” he said. He described strangling the woman from behind. “That’s my thing,” said Kobe, who then suggested they talk to another woman—his longterm lover—because she could vouch for this sexual preference. But he didn’t want his wife Vanessa to know. The police officers said they couldn’t promise that it wouldn’t get out.

When it did, his accuser was vilified by Kobe’s defense team and they disclosed her past mental health issues. She decided not to testify in court against him. His public letter admitted that his accuser did not see their encounter as consensual. The case was settled out of court for an undisclosed sum. He and his wife separated again. But they reunited before having another baby girl last year.

I’d been his late daughter’s age, 13, when I was gang-raped by classmates. They’d overpowered me. My mouth and nose were covered and I couldn’t breathe. I thought I was going to die. It took me decades to face it.  Before that, my “coping tool” was avoidance. I had no words for what happened. I didn’t even understand that it was a rape and blamed myself. As I grew older, I realized it had nothing to do with the sexy V-neck I’d worn or Bacardi I drank. I’m sober now, single again, and in my fifties, recovered enough to write and talk about what happened to me as a teenager and know that the only cause of rape is rapists.

I noticed that many of the major newspapers mentioned Kobe’s complicated legacy, as did Roxane Gay and Evan Rachel Wood. It is surprising though, that Oprah Winfrey, a rape survivor herself, continues to post photos on social media without any mention of the credible rape allegations and horrific treatment of the accuser online.

Since last Sunday, assault survivors who have said publicly that they are triggered by seeing the deification of a rapist. Washington Post reporter Felicia Sonmez, although reinstated now, was suspended for merely posting a link to the original Daily Beast article, “Kobe Bryant’s Disturbing Rape Case: The DNA Evidence, the Accuser’s Story, and the Half-Confession.”

Outraged fans demanded that the Washington Post fire her. It is hard to believe that the outlet caved to the angry Twitter mob and suspended her. When she received death threats, an opposing wave of defenders—myself included—created an even louder frenzy. While the haters had pointed to Kobe’s foundation and what a good father he’d been, #TimesUp roared. It was reassuring to see that she did not lose her job. It proves that every voice does matter.

My deepest sympathies go out to Vanessa, her daughters, and the families of the other victims in the crash. I am in awe of the sports icon’s talent, likability, and many contributions, Kobe’s accuser needs to know that his legacy also includes her.