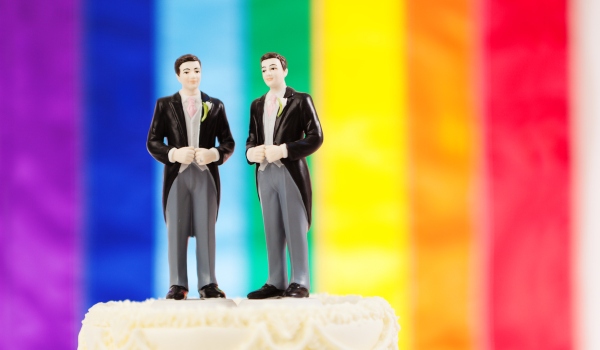 My question for Marco Rubio is, what are you going to do about this gay marriage you are still so against?

Our culture’s in trouble. Wrong is now considered right, and right is considered wrong. All the things that once held our families together are under constant assault. … If you elect me president we are going to re-embrace free enterprise, so that everyone can go as far as their talent and their work will take them. We are going to be a country that says that life begins at conception, and life is worthy of the protection of our laws. We’re gonna be a country that says that marriage is between one man and one woman.

This wrong-right thing is not exactly specified, but in context it clearly refers to abortion and gay marriage — so wrong, but not “considered right.”

What does it mean to say, “We’re gonna be a country that says that marriage is between one man and woman”? What does a country say? Does anyone really listen to what these people say?

Yes, they do. Because as of the morning of yesterday’s debate Rubio has a Marriage & Family Advisory Board to make sure that his words have meaning, and that right returns to right, while wrong is again returned to its proper place: hidden, shamed, and reviled.

Here’s the charge of the board:

This morning, the Marco Rubio for President campaign is excited to announce the formation of Marco Rubio’s Marriage & Family Advisory Board. Marco believes the family is the most important institution in society. He understands that in a vibrant culture of marriage and family everyone benefits, but in a culture where the importance of families is neglected all sorts of problems result. You cannot have a strong nation without strong people, and you cannot have strong people without strong values. Right and wrong. Good and bad. That is learned from your values instilled in you in the family. It is irreplaceable.

I wish the Republicans would debate this a little more seriously. Ted Cruz has proposed a Constitutional amendment, Jeb Bush and John Kasich have complained about marriage equality but not argued for overturning it, Trump says he opposes marriage equality but doesn’t really care. So what’s Rubio’s plan. Either you think it can be reversed, which is dumb, or you’re just attacking gays and lesbians as “wrong,” which is mean.

On Rubio’s board, Wilcox, Lerman, Hawkins, and Hymowitz are Family Inequality regulars. Of course he doesn’t really need policy advice at this point in the campaign, so this is just about signaling — it’s Rubio showing donors the direction he’s taking, and it’s these people deciding to put their names on his campaign. (Somehow, though, I’m sure they will also still be able to describe themselves as “non-partisan,” because wrong is now right.) It’s also the first time I know of that Wilcox has publicly opposed marriage equality, which is a promising turn in his maturation as a partisan hack.

Previously published on familyinequality.wordpress.com and is republished here under a Creative Commons license.