COVID-19 has given us the chance to discover just how far the country has slipped from our grasp. 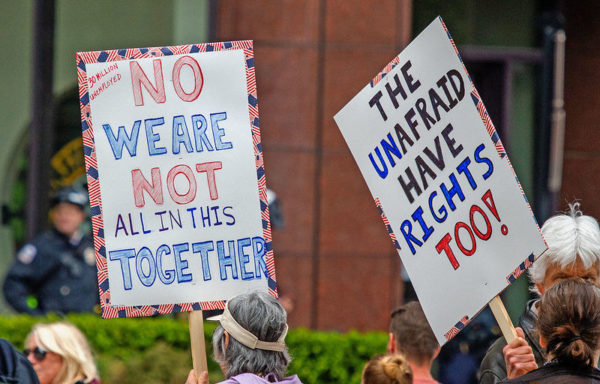 Fifty years ago four students were shot and killed at Kent State while protesting the Vietnam War and the nation stopped and mourned the senseless deaths. In recent days a woman opened fire at an Oklahoma City McDonalds wounding two employees because the dining room was closed. A security guard was shot and killed at a Flint MI Family Dollar store because he refused to allow people to enter without a mask. An innocent jogger is shot and killed by armed vigilantes in Georgia.

There is no mourning, only anger and resentment. Our nation is starting to singe and turn crisp around the edges.

Armed protesters, heavily armed, assault rifles in combat slings, stormed the Michigan State Capitol Building. I’m still not sure what they were really protesting, or why they needed all the firepower, but they were mad, and they wanted everybody to know how mad they were. It is a scene that is being repeated, reproduced, a passion play acted violently, in several states. All to the background music, the tribal drums of Trump tweets, imploring people to “Liberate Michigan.” Or Virginia, or anywhere else he finds disagreeable. He denies any involvement and his supporters rush to his defense.

“He didn’t ask anybody to do that!”

You can’t help think of Nero, though.

Our country is walking dangerously close to the edge. You can’t open Facebook or Twitter without seeing someone who wants to refute the nations leading epidemiologists. People who have decided Covid19 is some ploy to ruin the economy or destroy a presidency, or something darker and more sinister.

Scientists have become the enemy, along with the press they are colluding to… What? I still haven’t been able to get to the bottom of that morass and I’m getting a little sick of looking. Meanwhile, Trump publicly questions and denounces the WHO, defies CDC guidelines, openly questioning and second-guessing the extensively educated and widely respected staff members of his own choosing. His animosity with the press is already established and documented.

Our country is hovering on the brink of explosion. It is getting hot, and is only going to get hotter. Right now is the time for action. Start registering voters, convince them of the importance of participating. Democracy withers and dies when less than fifty percent of the eligible voters actually vote.

Write to your congressperson and demand they confront the misinformation bubbling constantly from the White House. Let them know you are planning to vote, and you are not happy with the way things are being handled. Support candidates demanding change.

Look, it’s just as much our country as it theirs. It is time for the mild to be heard. It’s time to mobilize the overwhelming percentage of the country that believes things have gone too far.

We need to return sanity to our country. Covid-19 has given us the perspective to understand just how foul things have become. It’s given us the chance to discover just how far the country has slipped from our grasp. What we do with the opportunity is up to us. We need to choose wisely.