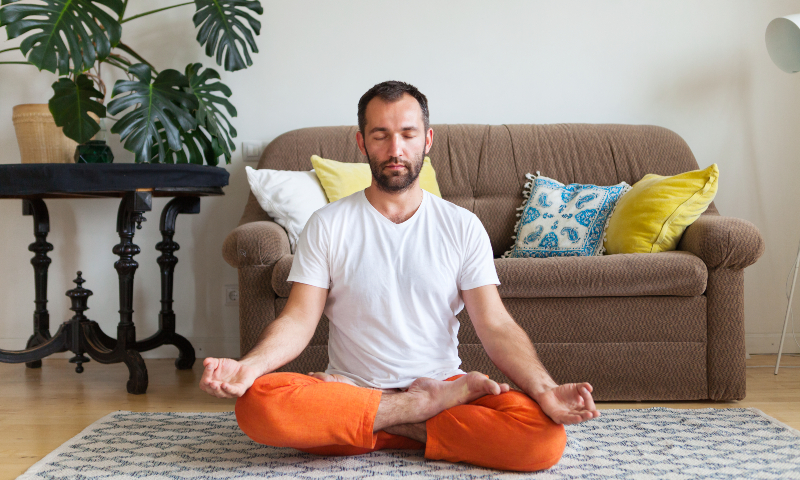 Forced isolation causes stress and nervousness. But it’s also an excellent occasion to make the brain work, improve health, become more productive and change the world view. Meditation will help you along the way.

The year 2020 was truly shocking for the planet. The coronavirus epidemic has led to global change. Many countries closed their borders and declared total quarantine. For many people, forced isolation has become a real challenge. A person who is used to being at work and communicating with people experiences stress and neurosis. This can lead to depression and a nervous breakdown. But we suggest you take quarantine as an opportunity to become better. And there are many ways to do this. For example, meditation, which has a lot of positive qualities and will help you improve physical and mental health.

Sadly, this is a fact – after 20 years, the brain begins to age. Scientists from the University of California concluded that meditation for the brain is like a rejuvenating face cream. Of course, 20 years of age will not come back and the aging processes will not stop, but meditation will help to better preserve gray matter for many years.

Also, scientists studied the brain activity of two groups of people: in the first, some people did not practice meditation, in the second – those who had been practicing it for more than 20 years. In people from the second group, the brain is better preserved as they age than in people from the first group. Meditators had more gray matter in all parts of the brain. Yes, older meditators lost in brain volume compared to younger participants from the first group, but their age-related brain loss was not as pronounced as in those who did not meditate.

The Center for Healthy Lifestyles and Educational Achievements, located in San Francisco, has implemented the Quiet Time program in 4 city schools. Students of the 7th and 8th grades added two 15-minute breaks for meditation to standard lessons and changes, as a result, academic performance increased markedly. Also, scientists from the University of California experimented at Richmond Elementary School. They found that after 5 weeks of meditation, elementary school students began to behave better in the classroom.

Besides, young researchers from Iran studied how meditation will affect grades during exams. In total, 107 students took part in the study. One group during one semester was engaged not only in a study but also in meditation. As a result, during the exam, meditators were half as worried and passed the exam better than the guys from the other group.

Another interesting experiment from scientists from the University of Texas. This study was about quitters. They divided the study participants into 2 groups. The former was sent for relaxation, the latter for meditation. Participants in the first group smoked as much as before, and meditators began to smoke less by 60% after the second lesson. In them, researchers noticed increased activity in areas of the brain associated with self-control.
And scientists from Yale University concluded that smokers who have mastered meditation quit smoking with a much higher probability than those who received conventional treatment.

Researchers at Stanford University scored 56 participants with social phobia. They sent the first 25 people to aerobics, the second group of 31 participants – for meditation. The groups did not differ by gender, age, ethnicity or education. After completing the course, the second group more than the first, the severity of symptoms of social phobia decreased, they began to experience less negative emotions in social contacts.

Besides, under quarantine conditions, meditation has one very useful property. It allows you to relax and avoid anxiety. Proper meditation eliminates the feeling of loneliness and helps to feel inner harmony. This is a very important and useful property in isolation.

American scientists have proven that meditation relieves pain. During meditation, areas of the brain in which there are many opioid receptors are activated – they are responsible for the regulation of pain.

During the study, healthy volunteers were given an intravenous administration of an opioid receptor antagonist (a drug that enhances the sensation of pain) or saline as a placebo. Researchers compared the response to intense heat (far from pleasant). For volunteers who were given a working solution, meditation reduced the intensity of pain compared with the “salt” group. Also, as a result of the study, scientists concluded that the traditional treatment of chronic pain in combination with meditation can be more effective.

A group of scientists from the Institute of Natural Medicine and Prevention of Maharishi University observed changes in the health of people with an increased risk of heart disease.
The first group of scientists was sent to the “Health Education Class”, where participants were told about how they can balance their diet to maintain heart health, and conducted physical education classes. The second group practiced meditation. All study participants received normal medical care, took prescribed medications. The experiment lasted for 5 years. As a result, scientists found that members of the second group have a 50% lower risk of heart attack and stroke than the first group.

#7 Your Memory Will Get Better

Harvard neurophysiologists recruited people who had never meditated and performed magnetic resonance imaging. Then they were divided into two groups, one of which was sent to a course of meditation. After 8 weeks of training, scientists found differences in brain volume between the two groups in 5 different areas of the brain. In particular, in meditators, scientists noticed a thickening in the left hippocampus – the part of the brain that is responsible for learning, cognition, memory, and emotional regulation.

In gerontology – the science of aging of living organisms, two types of age are divided: calendar and biological. And if to determine the calendar age, scientists just need to look into the passport, then to determine the biological age, a thorough examination of all body systems is required.

A team of scientists led by Professor Robert Keith Wallace has studied how the calendar and biological ages differ in meditating people. They examined a group of 84 people with an average age of 53 years. All participants practiced meditation.

Some Tips for Start Meditation Now

Some beginners think that meditation is a long and complex process that needs to be studied. You can devote this to just a few minutes a day. We will give you some tips to help you try the easiest way.

Take a comfortable pose. This does not have to be a lotus position. You can meditate even while sitting on a chair. The back is straight, the shoulders are straight, the feet are resting on the floor, eyes are closed.

You can turn on the music for meditation: it helps not to lose the sense of time.

Different thoughts and ideas will distract from the exhalation count. This is normal. Do not cling to them, just watch them from the side. If you are distracted, do not scold yourself – gently turn your attention to breathing and start counting again.

Pay attention to how the body behaves when you breathe. Watch your chest, shoulders, and stomach.

When 2 minutes have elapsed, take a deep breath and exhale. If you want, praise yourself and smile.

Gradually, you can increase the time of meditation. Scientists say that if you meditate for 25 minutes for 3 days, you will almost completely get rid of stress, and over time, you will feel the other positive effects of meditation described in our article.
—