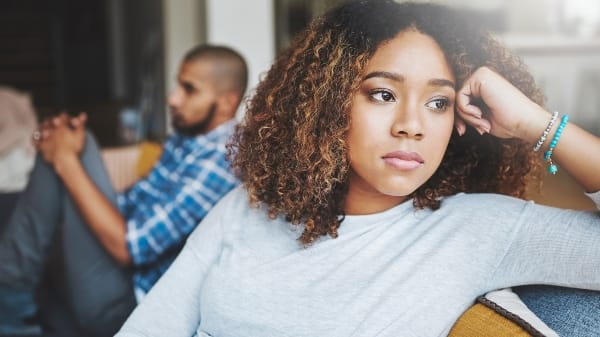 Ryan and I have been dating for over eight years and we don’t seem to be moving any closer to a commitment. It feels like I’m spinning my wheels and growing more and more dissatisfied every day with being in a state of limbo. You see, I’m twenty seven and most of my friends are engaged, married, or enjoying being single. I don’t really fall into any of those categories.

Don’t get me wrong, Ryan’s a great guy but he just isn’t the marrying kind. Even his mother, Laurie, told me this at his older brother’s wedding reception after a few glasses of wine. It’s almost like she was warning me but I just can’t seem to break things off with him. When I ask him why we’re not moving to the next level, he says he doesn’t see the point since his dad walked out on his mom after twenty years of marriage. He just doesn’t believe in marriage and thinks most are doomed to fail.

I grew up in a divorced home too but both of my parents remarried and are pretty happy. Although their divorce was hard on me when I was young, I mostly got over it. Ryan’s got a lot of great qualities. He’s handsome, charming, and affectionate. We have similar interests but we argue a lot because he wants to go out with his friends. When he does, I can’t deal with it because I’m worried he may meet someone else that he likes better.

My mom and a lot of my friends think I’m settling for less than I deserve with Ryan because I’m afraid of being alone. I tell them they’re wrong because I do love him and he says he loves me. But it’s true that I’ll do almost anything to avoid being alone.

Please help me figure out whether or not I should break things off with Ryan. I don’t want to have regrets if we split, but I don’t want to be alone in my 30’s and 40’s. Do you think Ryan will change if I hang in there a little longer?

Yours is a common problem. You seem to know intellectually that you shouldn’t have to settle for less than you deserve in your relationship with Ryan but your emotions are conflicted. You may be unwilling to take the chance of breaking things off because you fear you won’t meet someone else and will be alone for a prolonged period. You seem to hold on to the hope things will change even though you and Ryan don’t share the same goals for your relationship. After all, even his mother warned you that he is not the marrying kind. In my opinion, it’s unlikely that Ryan will change his mind in the near future because of his intense fear of commitment.

It appears that ambiguity in romantic relationships is on the increase in the 21st century and options range from friends with benefits to indecision about permanent commitment. According to Scott Stanley, co-director of the Center for Marital and Family Studies at the University of Denver, “Ambiguity is now the norm as opposed to clarity.” Author Jessica Massa, who interviewed hundreds of singles and couples for her book, “The Gaggle: How to Find Love in the Post-Dating World” informs us that many couples claim exclusivity but won’t call it a relationship. No wonder you fear breaking things off with Ryan and have anxiety about the possibility of establishing a permanent relationship.

Like many people, the primary reason why you may fear breaking things off with Ryan is because you are afraid to be alone. Many people question: Will I be alone forever? I’d like to challenge you a little and say: So what? There’s more to you than being part of a couple. Tell me about other relationships in your life. Tell me about the hobbies and passions that bring you joy. Tell me about your dreams. What makes you happy? What more is there to you than the person who is afraid to be alone forever? I promise you, there is a lot more to you.

The good news is that new research is being conducted on this topic. A study by Stephanie S. Spielman demonstrates that fear of being single is a meaningful predictor of settling for less in relationships. In her groundbreaking study, Spielman discovered that the fear of being alone is a strong predictor of staying with a partner who is wrong for you. Further, Spielman’s results showed that individuals who report being fearful of being alone will stay with unresponsive, less attractive partners rather than face that dreaded fate.

Of all the difficult experiences that individuals face in life, being alone can be among the most challenging. Growing up, you probably weren’t given good examples of how to be alone. It seems like everything you see in movies and TV and on the internet is about how to find the right partner, and make it work. There’s nothing wrong with seeking love, because it’s beautiful and can bring about some of the most treasured moments in our lives. But very few people know how to be alone and do it well. They aren’t happy to be alone. They fear it and seek love wherever they go. Too often the pleasure they find with falling in love is the sweet release of no longer being by themselves in the world.

Often single women may be reluctant to acknowledge the challenges of being alone for fear of being seen as desperate or needy. According to author Sara Eckel, many of the stereotypes we have about single women are misleading. She writes, “The single life isn’t a prison sentence nor is it a cocktail party. It is simply a life – a life with responsibilities and rewards, good days and bad ones, successes and failures. In her article “Stop Telling Women They Are Fabulous,” she reminds us that we don’t really know how to discuss single women in our culture because in times past they were seen as lonely spinsters, quietly languishing in their studio apartments.

Too often I hear women (and some men) who are coupled up rationalize why they are still in a relationship, when maybe they shouldn’t be. They say things like, “I know my relationship isn’t perfect, but at least . . . he doesn’t yell at me.” Or “he really is a good dad.” Or “he will always be faithful to me.” When I hear things like that I am reminded that breaking up with someone is an act of courage. To be honest with someone about why the relationship isn’t working is an act of love. When you can accept that your relationship doesn’t make you the best person you can be, and you correct course by breaking up, you become immeasurably stronger.

Although the answer varies from person to person, one factor that causes someone to settle is past experiences of romantic rejection and another is fear of prolonged singlehood. Whatever the reason, if you assess that you are staying with Ryan even though he’s wrong for you, it’s important to take a steps to determine if you need to end your relationship. This can take time and a commitment to loving and respecting yourself. However simplistic this may seem, you are responsible for your own happiness.

According to author Whitney Caudill, “Feeling loneliness or fear from time to time as a single person is normal. In fact, it is normal for everyone.” The key is to recognize this and realize that these are just feelings. Staying in a relationship that is going nowhere to avoid loneliness rarely produces good results.

Here are some signs that you are settling for less than you deserve in your relationship:

Facing your fear of being alone is the first step in moving forward. In her Huffington Post article How to Be Alone (And Not Be Unhappy) Poorna Bell writes, “There is a problem, a serious cultural problem, about solitude. Being alone in our present society raises an important question about identity and well-being.” Bell posits that there is a contradiction in the 21st century because our culture values individualism and autonomy, yet we both fear and dread being alone, and denigrate those who embrace singlehood.

Here are 5 ways to stop settling for less than you deserve in relationships and cope with your fear being single:

In closing, you may need time and perhaps the help of a skilled therapist or relationship coach to figure things out. In the meantime, remind yourself that you are worth the effort and deserve to be loved and to have a commitment from Ryan. Often, the courage needed to end a relationship that is no longer meeting one or both partners’ needs shows the greatest strength. Perhaps one of the toughest pressures of being single comes from within yourself. However, if you decide to stay in your relationship because you feel it’s worth trying to save, consider couples counseling if Ryan is willing and motivated – before you walk away.

A version of this post was previously published on movingpastdivorce.com and is republished here with permission from the author.