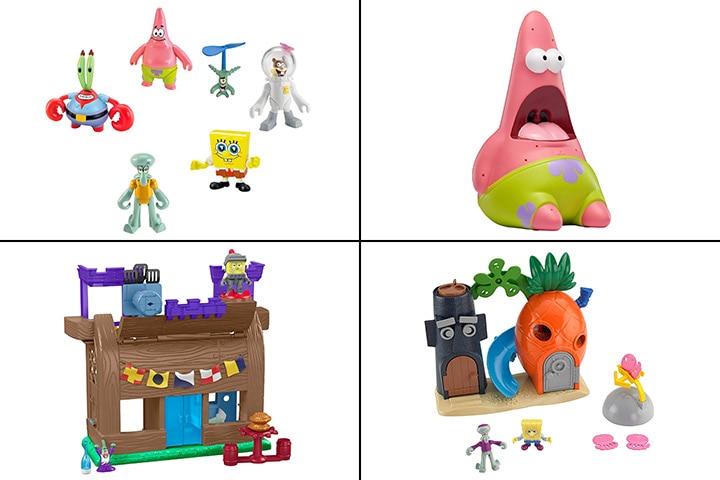 Let us guess.Your child loves SpongebobSquarepants and their love for this quirky character why you are looking for Spongebob toys. We are aware of children’s love for this box-shaped boy. 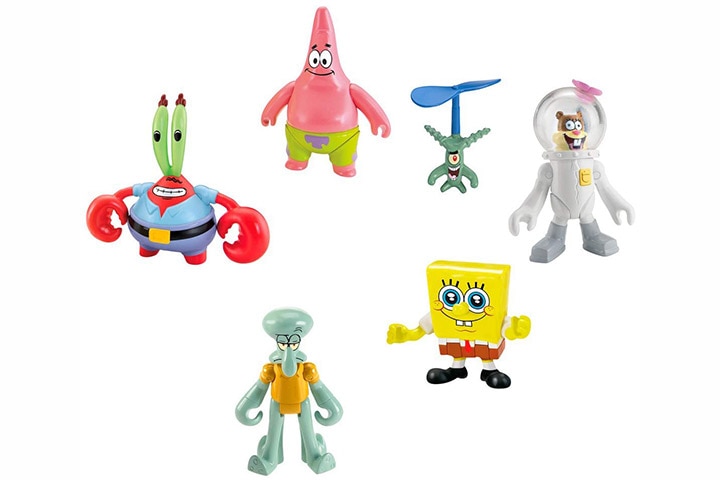 This six-figure playset can be a delight for your little one because it includes the central characters of Spongebob cartoon such as Patrick, Sandy, Mr. Krabs, Squidward, Plankton, and SpongeBob. Your child can create their own stories and make the characters act the way they want them to. 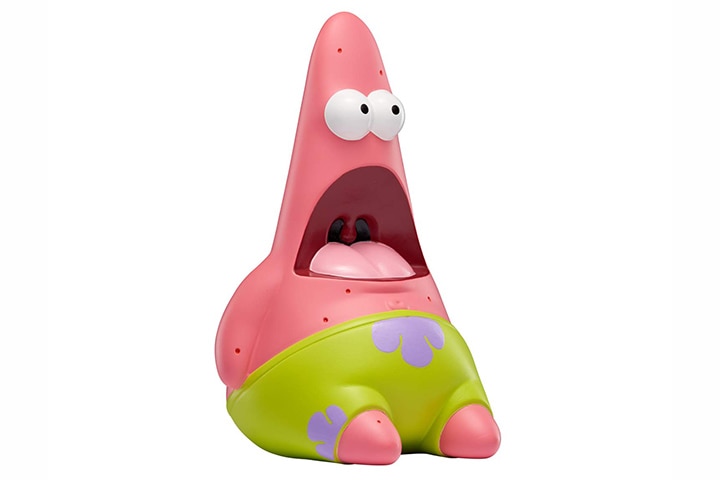 Patrick is an adorable starfish that most kids love. And a surprised Patrick looks a lot more cuter with his mouth opened wide enough to show his tonsils. This meme is a part of a collection of SpongebobSquarepants cartoon characters. 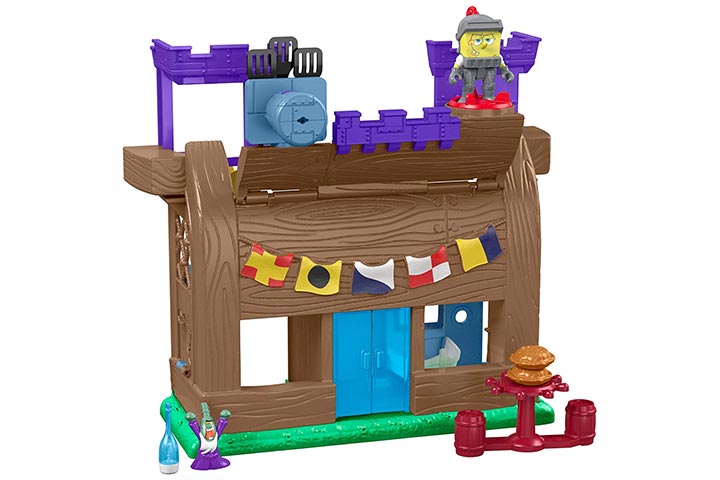 The secret recipe to Krabby Patty formula is in danger, and Spongebobhas to retrieve it from Plankton, who has stolen it. With the mere twist of the powerpad, this restaurant turns into a castle and launches spatulas to attack and imprison the thief. 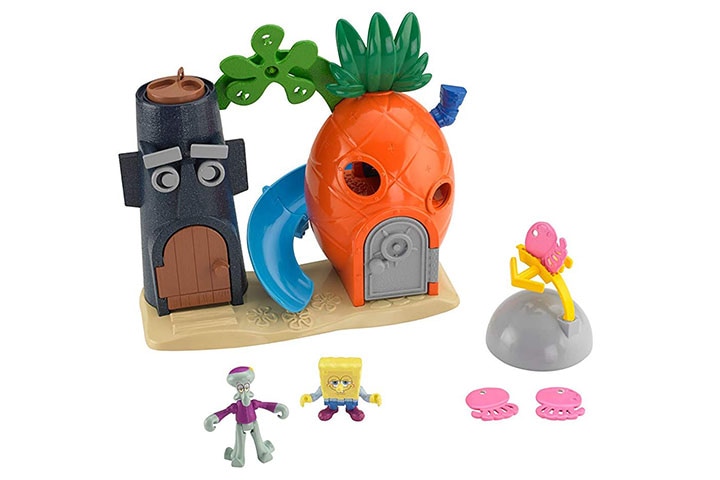 Time for a fun battle. This playset includes Bikini Bottom playset, SpongeBob, Squidward, and three jellyfish projectiles. Spongebob slips out of bed through the slide to launch a jellyfish attack from Patrick’s house. Also, turning the disk on squidward’s house prompts him to make funny faces. 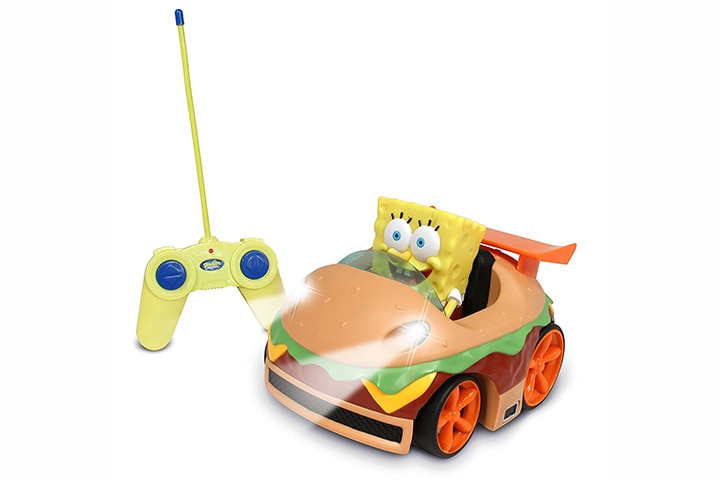 It is time to send Spongebob for a cool ride outdoors. This car comes with Spongebob sitting inside it while your child controls it with a remote. It has functioning headlights and can move forward, backward, and take right turns. This toy is only suitable for kids aged six years and above. 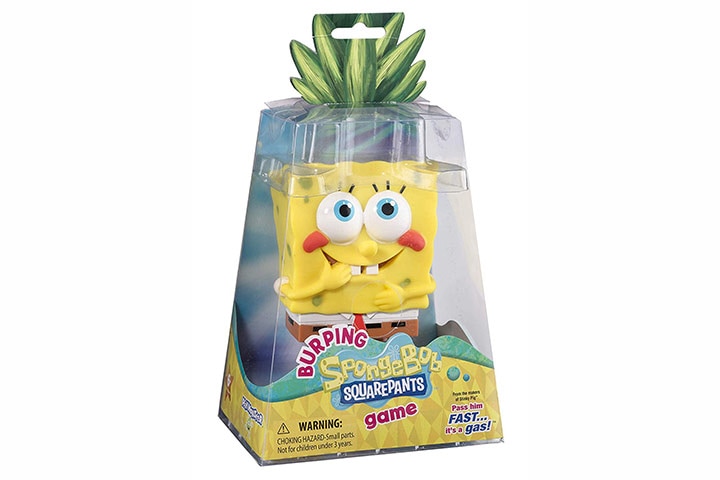 In this game, children can play ‘pass the parcel’ with Spongebob being the parcel. He burps after a few seconds, and each time he burps the person holding him must pick a token. The person with the least number of tokens wins. Suitable for kids aged six years and above. 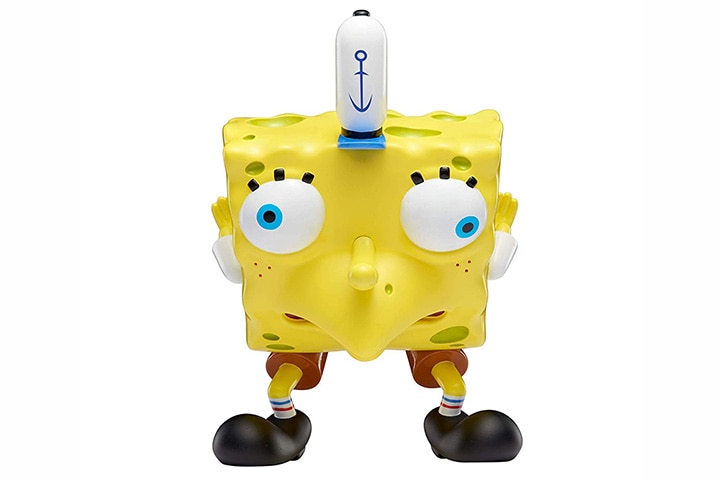 This Spongebob masterpiece meme is a part of its vinyl figurine collection that caters to those obsessed with this popular cartoon character. The mocking Spongebobwas seen in one of the episodes titled ‘Little Yellow Book’ of season 9. 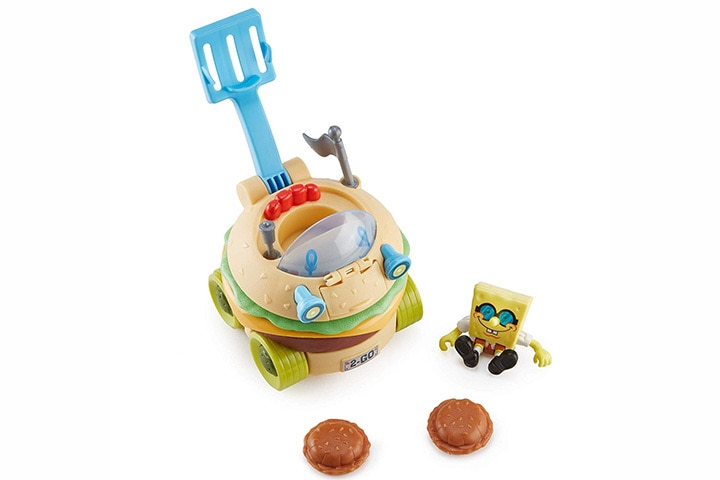 Let your child drive their favorite Spongebobaround in his krabby patty wagon and launch some patties in the air.Load the patty on the large spatula and see it flying through the air. Suitable for kids aged between three and eight years. 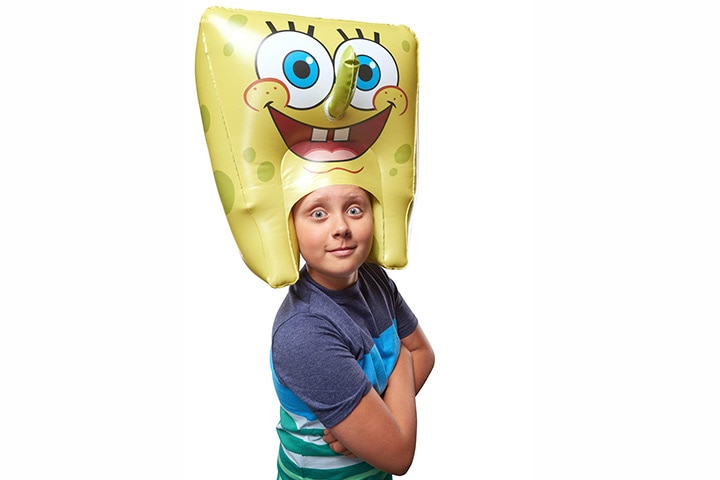 Have a Spongbob theme party for your little one? Then do not forget Spongeheads. Available in four Spongebob characters these Spongeheads will only add more fun to your theme party. 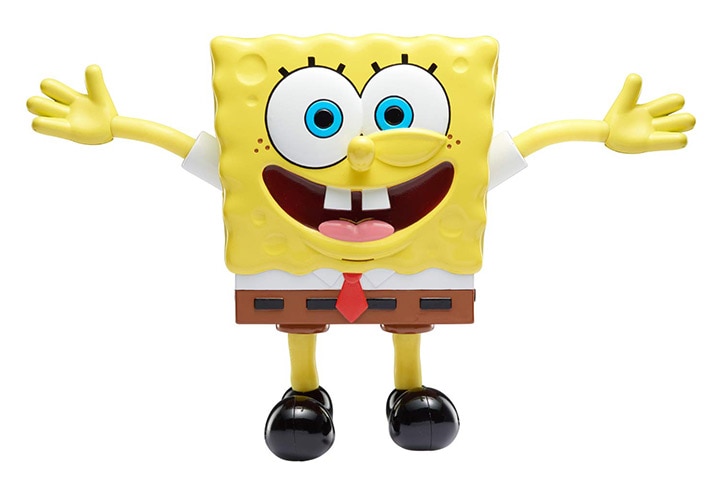 Pull cute little Spongbob’s hands and legs, and it will just keep stretching. While you do that, he will blurt out something funny leavingyou in splits. Suitable for kids aged four years and above. 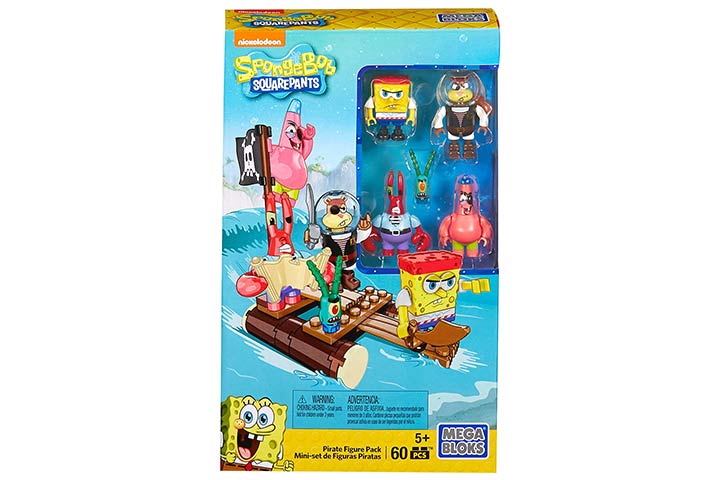 This is a collection of Spongebob figurines but all in a pirate theme. The set comes with five characters in pirate accessories. This is a great way to encourage your child to come up with different stories to fit in their favorite Spongebob characters. Suitable for kids aged five years and above. 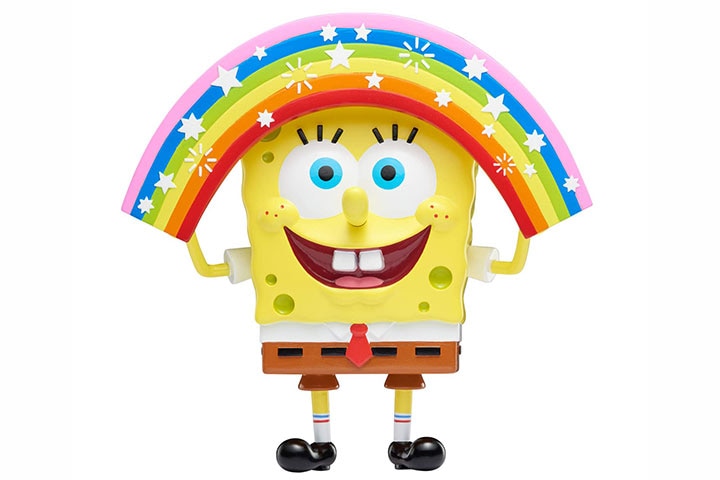 If your child is obsessed with collecting Spongebob figurines then they should not miss the Imagination Spongbob meme. It is based on a memorable scene from an episode from season 3. 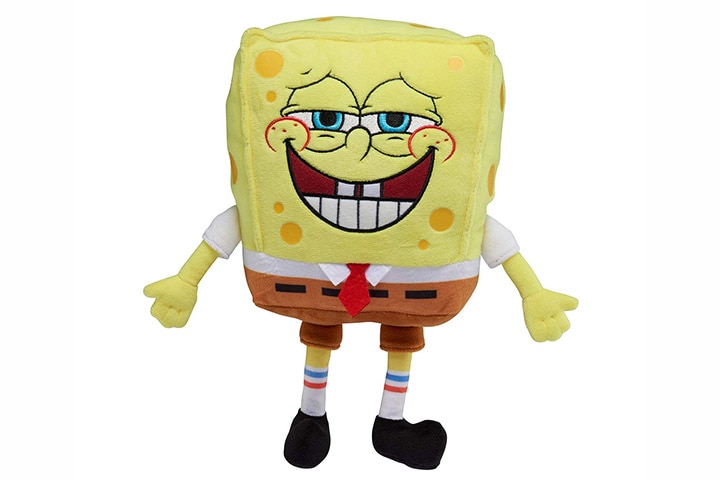 What happens when Spongebob has a hearty meal? He gets gassy. And what if you press his belly? He will fart. This plush Spongebob toy makes funny belly sounds and speaks phrases that can make your kids laugh.

How To Choose A Spongebob Toy For Your Child?

When looking for a Spongebob toy, you may consider three factors:

1. What age is considered appropriate for kids to play Spongebob toys?

This depends on the age at which your child wants to play with Spongebob and the age range mentioned on the toy. Most toys are suitable for children aged three years and above.

2. Is there any negative news about Spongebob for kids?

Spongebob cartoon has often been in the news forits influence on kids. A study on a small group claimed that since the cartoon is fast-paced, it negatively impacted kid’s problem-solving skills and focus (1). Professor of psychologyat the University of Virginia,Angeline S. Lillard, says, “The children who watched the cartoon were operating at half the capacity compared to other children.” However, she also added that such effects were not specific to kids who watched SpongebobSquarepants.
Moreover, the criticism is for the show and not the toys. Your kids can always play with Spongebob toys if they like them.

3. Why are Spongebob toys so expensive?

Not all Spongebob toys are expensive. If you check out the Spongebob playsets and toys given above, you will observe that the price differs from brand to brand. You may always choose the toy as per your budget.

Spongebob toys are cute to look at and great to play with. Children can play together and have a fun time creating their own stories and scenes. Which one of these did you like the best? Do share your choice in the comments section below.

Disclaimer: MomJunction may earn a commission when products are purchased through affiliate links given in the article. However, this partnership does not influence the editorial content featuring in our list.